The following was excerpted from the program for Masterwork Art and Music Foundation's 100th performance of Handel's Messiah, performed at Carnegie Hall on December 18th, 1983: 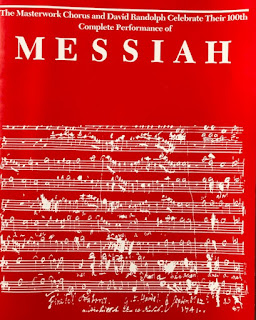 The History of Masterwork


The Masterwork Chorus was formed with a nucleus of 28 people on May 25th, 1955 in the living room of Shirley May, in Whippany, New Jersey.

Mr. Randolph and Mrs. May set out to create a chorus which would have as its goal, quality of both music and performance. David Randolph became the Music Director and Conductor of The Masterwork Chorus. Under his guidance, the chorus has performed all works in the original language, and with professional accompaniment.

Mrs. May was eager to sing in a good chorus. Finding none of the quality she had in mind - she decided to create one. The first step was to find other people who shared her desire. After she had gathered 28 of them, her next step was to communicate with David Randolph, whose work she was familiar with through his radio broadcasts and recordings.

The first performance by The Masterwork Chorus was of Beethoven's Ninth Symphony. It took place in October of 1955, exactly five months after the group was formed. It was for a United Nations Day celebration, with the New Jersey Symphony Orchestra, in Newark's Symphony Hall.

On January 27th, 1956 the chorus gave its maiden concert under its own auspices. Since the date was the exact 200th anniversary of Mozart's birth, the program consisted of his "Requiem," and excerpts from "The Magic Flute."

The following year, the chorus presented Bach's "Mass in B Minor," and on its second birthday performed Bach's "Passion According to St. Matthew." The New York Times found the occasion of sufficient importance to send to Morristown the critic, Edward Downes, who wrote, "One of the greatest moments in music had its full impact upon the audience." 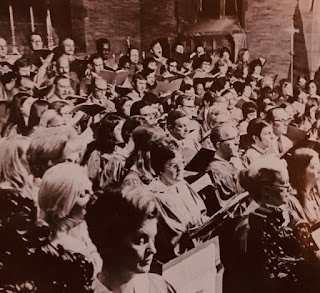 The chorus was then engaged by the prestigious Westminster Recording Company to make one of the earliest stereophonic tapes. It was of the sixteenth century works for double chorus. Typical of the reviews garnered from across the nation was the one in The Review of Recorded Music, "No praise can e too extravagant for this exceptional group and its talented leader."

Reviewing Masterwork's 1958 performance of Bach's "St. John's Passion" in Morristown, Jarold Schonberg wrote in The New York Times, "This is the sort of performance that choral societies throughout the country would do well to emulate."

In 1959, in celebration of the 300th anniversary of the birth of the English composer, Henry Purcell, the chorus gave two complete performances in Morristown of his opera, "The Fairy Queen." In his New York Times review of the concert, Eric Salzman concluded with the words, "The Night was hot. The seats were hard. But the performance was worth the discomfort."

Eugene Ormandy engaged The Masterwork Chorus to appear under his direction with the Philadelphia Orchestra in 1959, in a performance of Beethoven's "Choral Fantasy."

In December of 1960, The Masterwork Chorus made its New York City debut with a Carnegie Hall performance of Bach's "Christmas Oratorio" before a sold out house, and to rave reviews in The New York Herald Tribune and The New York Times.

1957 saw the beginning of the series of performances by The Masterwork Chorus of Handel's "Messiah," complete with Handel's orchestration. Ross Parmenter of The New York Times, in his review of Masterwork's first Carnegie Hall "Messiah" performance said, "The chorus is so good that if it decides to come annually to Carnegie Hall, it will be welcome." That statement was somewhat prophetic because every performance for the next three years was sold out. To meet the ever-increasing demand for tickets in subsequent years, the chorus added successively a second, third , fourth and fifth performance. On many occasions, two were given in one day, with the entire chorus and orchestra sometimes giving is afternoon performance in Carnegie Hall, and then moving to Avery Fisher Hall for the evening performance. 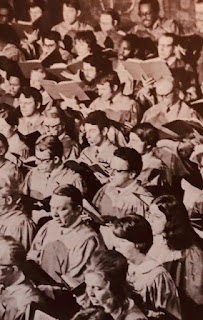 In 1962, The Masterwork Chorus brought to Carnegie Hall its performance of the Brahms Requiem, a work in the romantic style. The New York Post critic said, "It is a joy to report that a mixed chorus of more than 200 from Morristown equalled and possibly surpassed the finest performance of the Brahms Requiem that I ever heard. Of course the star of the evening was the conductor. His chorus must adore him for his musicianship, as this one obviously does. For coherence, fervor, and taste this beat them all, and when the voices were hushed to a ghostly pianissimo, shivers ran down your spine."

Anticipating the opening of New York's Lincoln Center, The Masterwork Chorus reserved a date for an appearance during the very first season of the Philharmonic Hall, as Avery Fisher Hall was then known. On Good Friday, 1963, the chorus, then 242 strong, performed Bach's "Passion According to St. John." In keeping with the intention announced at the time the chorus was formed -- to use the composer's original instrumentation whenever possible -- the orchestra for this performance included the lute, viola d'amore and viola da gamba.

Commenting on the fact that "a chorus of more than 200 was certainly not a very "Bachian number," The New York Times reviewer, Alan Rich said: "But Mr. Randolph, in addition to being a fine conductor, is also a very shrewd one -- he set himself the task of lightening the tone to fit the kinds of music the chorus is to sing during the long and complex work. It was an excellent compromise, and it worked well." The review ended, "Mr. Randolph's contribution to the evening was in the form of a swift-paced and dramatic reading of the score...which concentrated with considerable success on making an exciting and enlightening evening out of a subtle and difficult masterwork."

Early in 1964, Peter G. Davis wrote in the nation-wide magazine Musical America, "David Randolph's Masterwork Chorus and Orchestra gave a first-rate performance of Mozart's Requiem at Carnegie Hall on November 3rd. It is remarkable how a chorus of this size can adapt to the nature of the work at hand, be it Bach, Brahms, or Mozart. The group brought lucid choral singing to its reading, resulting in a light, floating texture and a lineal clarity perfectly suited to this great work. Furthermore, here was a joy of making music infectiously communicated to the audience. The orchestra provided an excellent accompaniment."

The New York Times critic, Ross Parmenter, wrote of the same performance, "The massed tone was beautiful, the flow of line was controlled and the singing was expressive."

Lincoln Center's Philharmonic Hall was again the scene of one of Masterwork Chorus's  greatest successes. A May 1964 performance of Bach's monumental "Mass in B Minor" elicited the following statement from the critic of The New York Times, "The performance added a high point to a season that has been particularly blessed with fine choral singing." He concluded with the statement, "Because Mr. Randolph knows the baroque style so well, he inspired his performers to communicate what they were feeling and evoking in ways congruent with the character of Bach's music."

Just a few weeks after the Lincoln Center performance, the chorus repeated portions of Bach's "Mass in B Minor" in Princeton in a program that was shared with the organist, Virgil Fox. The concert was part of a several day series of programs given to celebrate New Jersey's Tercentenary.

Another appearance at Philharmonic Hall followed in March of 1964, when the chorus was invited to participate in a program of contemporary Israeli music together with Jan Pierce, Jennie Rourel, Julius Rudel and Charles Munch. The chorus opened and closed the program with a series of modern Israeli works in different styles.

In 1965, just ten years after its founding, The Masterwork Chorus was designated by The Music Journal, a nationwide publication, as one of the "Twenty-Five Outstanding Choruses in America." 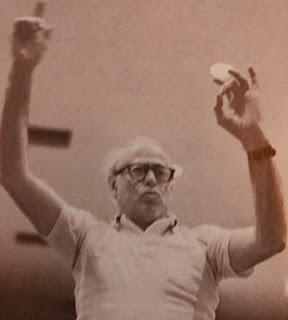 The tenth anniversary of The Masterwork Chorus was celebrated with two concerts -- one in May of 1965, in Morristown, and the second, one week later in Carnegie Hall, titled "Joyous Baroque Works." The critic, Louis Biancolli, referred to the latter as, "One of the season's most soul-satisfying concerts. Whether in straight orchestral music by Bach and Handel or in choral masterpieces by Back and Vivaldi, the standards were of the highest quality last night. "Writing in the New York Work-Telegram and Sun, he continued, regarding Bach's "Magnificat,"" Bach's work lives up to its title, as last night's performance, thanks to Randolph's inspiring command of detail and outline, lived up to Bach. It refreshed and lifted the spirit."

In July of 1967, The Masterwork Chorus was invited by Channel 13 to give two one and a half hour telecasts of David Randolph's actual rehearsals of Bach's "Mass in B Minor." The programs were considered important enough to have been re-broadcast twice.

In May of 1968, The Masterwork Chorus repeated its success with Bach's "Mass in B Minor," this time in Carnegie Hall. That was followed, in October of the same year, by a Philharmonic Hall performance of Purcell's opera, "The Fairy Queen," the same work that had been given in Morristown on the 300th anniversary of the composer's birth.

The critic, Byron Belt, wrote of this performance, "David Randolph and Leopold Stokowski performed neglected music over the weekend. In any contest for quality, Randolph and his splendid Masterwork Chorus of Morristown would have won hands down."

"It must be noted for the record that the chorus was probably 10 times too large for the work, but they were so handsomely prepared and conducted, by one of the best conductors in the business, that their lightness and articulation would have done honor to any professional group."

New York's newspaper, The Villager, said, "The Masterwork Chorus is capable of exquisite refinement of tone in addition to possessing the massiveness that can be expected from 150 healthy voices." 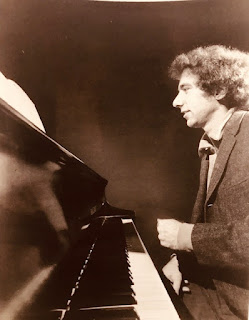 A partial listing of The Masterwork Chorus's subsequent undertakings includes three performances of the Brahms "Requiem" in 1970, one in Lincoln Center's Philharmonic Hall with The Masterwork Orchestra, one with the Suburban Symphony Orchestra in Cranford, New Jersey, and one with the Philharmonic Symphony of Westchester, in Mount Vernon, New York.

The following year saw two performances of Verdi's Requiem, one in Morristown, and one in New York City. In 1972 the chorus was engaged by the New Jersey Symphony, conducted by Henry Lewis, for a Garden State Arts Center performance of Beethoven's Ninth Symphony. A re-engagement resulted the following year for two performances of the same composer's  "Choral Fantasy" --- first in Hackensack, New Jersey, and then in Carnegie Hall.

Included in the repertoire of the chorus were Handel's "Solomon," Beethoven's "Missa Solemnis" and Vaughn Williams's "Sea Symphony," all of which were performed for New Jersey's "Spectrum" Festivals.

There was an appearance with the Waterloo Festival Orchestra, under Gerard Schwarz, in Beethoven's "Choral Fantasy."

Writing in the Sunday Star-Ledger on October 2, 1983, Gordon Bishop said: "There's nothing quite like The Masterwork Foundation anywhere in America." 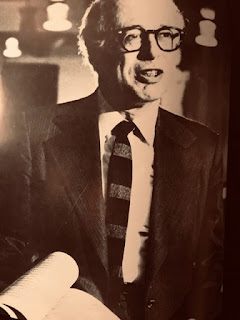 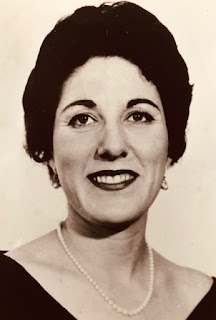 Masterwork Art and Music Foundation visionary and founder, Shirley May

'A Life in the Arts' Interview with Kico Govantes

Enrique "Kico" Govantes is a Cuban-American artist and art collector. Kico shared details on his creative process as a painter a... 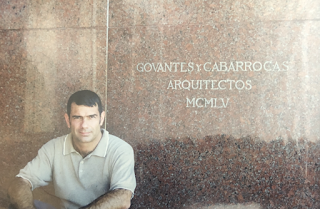 TMWUSA / Todd Whitley
This is the blog of the Masterwork Foundation, authored by it's new Executive Director.